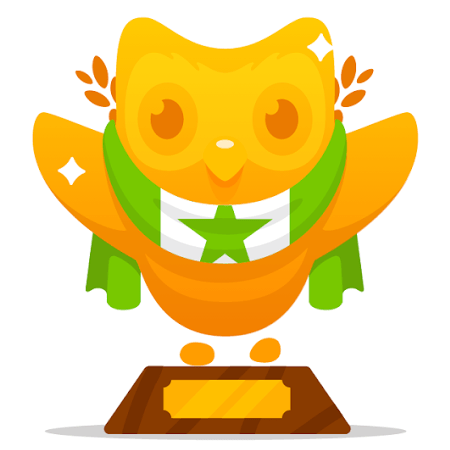 Last night I finished the Esperanto tree on Duolingo and got my second golden owl. The first, a few weeks ago, was for French, which I also studied at university, and the third might be for Irish, which intrigues me for being so different to English and the Romance languages.

Here’s that same passage in Esperanto, doubtless with some mistakes, as I’m still only a beginner:

Duolingo is an addictive way to learn and just to explore languages: in a few hours an English speaker can do the first units in several different European languages. English courses for speakers of a range of other languages, including Chinese and Japanese, are already available, and Duolingo’s first Asian language, Vietnamese, is 84% ready for a beta release. It’s by far the best way I’ve seen to learn a language, and I thoroughly recommend it. Going through the lessons is as potentially therapeutic as Tetris or Solitaire, and far more useful.

Of the many languages I’ve tried through Duolingo, Esperanto gets a special mention because it’s the only language I’ve found that I think is better than English. I’m unfashionably fond of criticizing languages for their flaws:

Some non-English languages I know at least a bit of do have admirable features, though:

The brilliant thing about Esperanto is that it consciously improves on other languages. Here are some of the ways it improves on English:

Esperanto does have some flaws: it should, arguably, not require noun–adjective agreement (which the Esperanto-derived language Ido does away with). The similarity of the correlatives makes them harder to remember than they might otherwise be. I’m undecided on the accusative case (the –n ending on nouns and adjectives in a sentence’s subject): while an unnecessary complication, it can make deciphering sentences easier, and creates some unusual possibilities for arranging them.

But, overall, Esperanto is easier to learn and get right than English or any other language I’ve seen. It is extremely easy to start speaking and writing once you have the basics, as shown by the way that the Facebook group for Duolingo Esperantists sees people using Esperanto to write to each other even while they’re still in the middle of the course.

As with national and ethnic languages, Esperanto has its own culture and history. That’s a bit of a surprise, given it was only invented in the 1880s. It is associated with internationalist politics, and has given rise to a smallish but still substantial body of original literature. All this adds some interest to learning it.

Like many other people who know Esperanto, I think the world could be a better place if more people knew and used it, especially if it became so widespread that people could learn it instead of English for cross-cultural communication. But I also think it’s worth learning just for the joy of experiencing something so elegant. Check it out on Duolingo for a few minutes: you might get hooked and come to feel the same way.

* I had to use û instead of the correct Esperanto accented u above, as WordPress kept converting the character to a question mark.