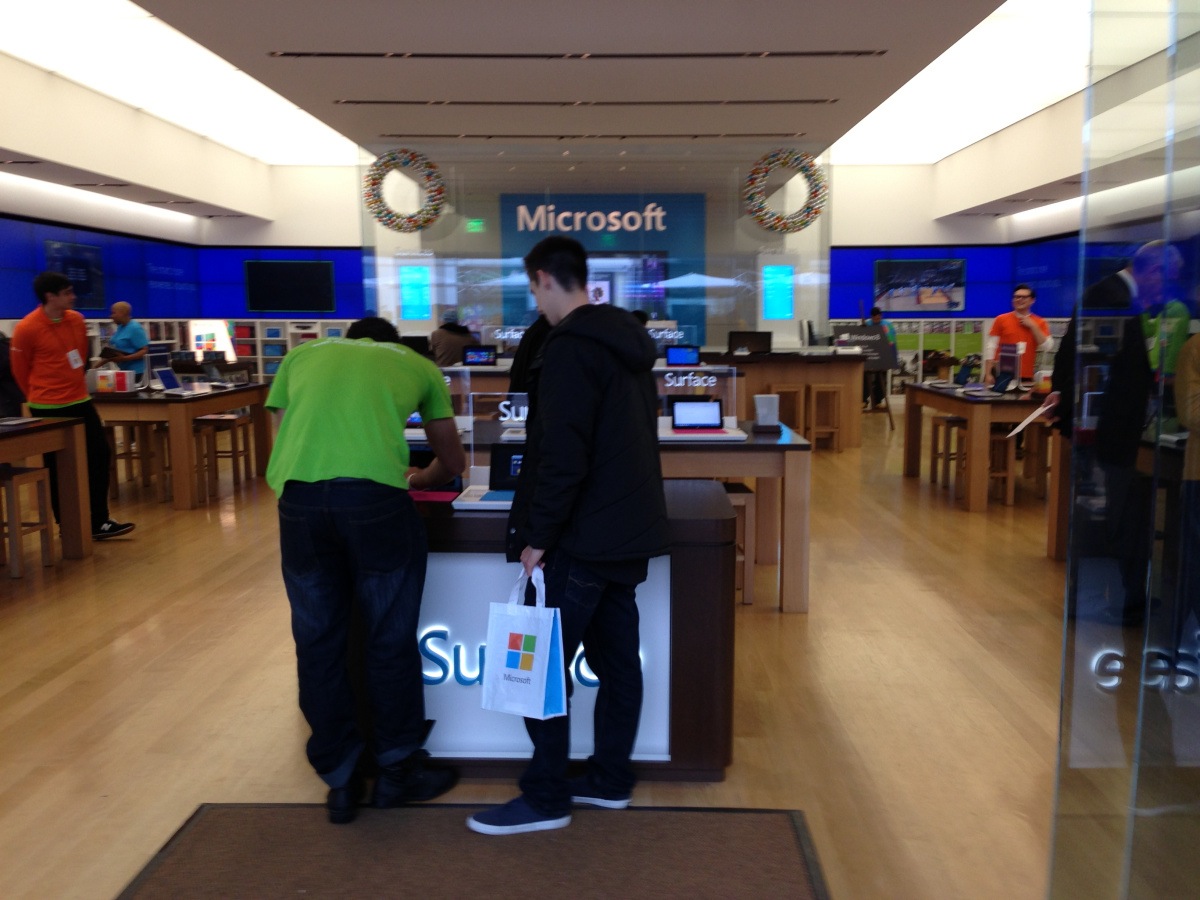 More chiefs than indians at the Microsoft store. (Source: CNNMoney.)

CNNMoney recently posted photos of Christmas Eve crowds at Apple, Sony, and Microsoft stores in the US. For Apple, it’s a good story–their stores are clearly packed. At Sony and Microsoft stores, the reporter snapped images showing more staff than customers.

Perhaps they got lucky, but I doubted.

On Facebook, one friend of mine responded to the story with this:

Fascinating. I do wish Sony were doing better. Microsoft can die, I’ve never liked them.

And I sort of wish Sony were doing better myself. A few years ago I read a biography of Sony founder Akio Morita, Made in Japan, and it seemed like a company to admire. I really loved the original PlayStation, and to a lesser extent the PS2 and PS3. But I feel like they have lost the plot.

Their commitment to proprietary media formats (Minidisc, ATRAC, Memory Stick, UMD, etc.) over many years sat poorly with a move to interoperability and open formats. And then, where they had (and still have) a reputation for good product design, Jony Ive raised the bar at Apple with a really rigorous, minimalist, form-follows-function aesthetic (which we’ll now see extend into Apple software, since Ive has taken over UI responsibility from Scott Forstall). Sony hasn’t stepped up to meet the challenge: think of the bizarre convex PS3, which you can’t stack other devices on top of, and the Xross Media Bar interface, which can’t handle large content and game libraries because it has no grid view. Its products are distinctive, but often at the expense of usability.

Microsoft is also a company I’ve never liked, but I have to admit that they’ve delivered some good products in recent years–though none so good that I would leave Unix-land to use them. I still do not consider Microsoft products as being of sufficient quality to be fit for mission-critical applications. But their Metro interface for Windows 8, though widely derided, is innovative and attractive, as is Windows Phone 8 and the XBox 360 dashboard. For the first time in years, they have a compelling design vision and user experience–but I still have a bad impression of them from all those times in the past when they championed DRM and have striven to lock users in to the Windows ecosystem. Not to say that Apple doesn’t do the same.

The one other company of recent times whose tech products inspire me, aside from Apple, is Google. When you look at their recent slew of iOS applications for Youtube, Gmail, and Maps, you can see them creating more elegant user experiences than Apple is presently doing in many fields, and with Android they have brought smartphones (and quite good ones) to the masses (although the unevenness of handset OS upgrades is unforgivable).

Ubuntu Linux I would like to like, and when it comes to web servers, I find myself using it a lot, but I never find that its UI is ever quite as good as Apple’s, and so long as I can’t use the Adobe Suite and numerous other important apps on it, I’m stuck on Mac OS. Plus–my Retina Macbook is amazing! I never want to use a sub-200dpi screen again.

Kudos to you, Apple: you deserve holiday crowds like that.