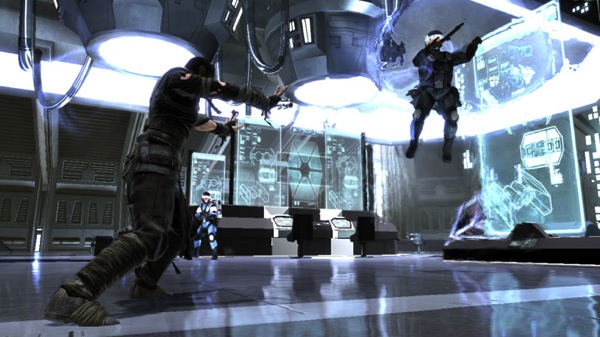 This demo of the forthcoming Star Wars game to be released for Xbox360 and PS3 in mid-September, is billed as providing around thirty minutes of gameplay—and on the default difficulty setting, that’s about right. And indeed, there’s few surprises of any kind in this demo. It lasts just long enough to show off high production values and show what extraordinary moments might shine through a thoroughly tried-and-tested action-adventure model, but doesn’t demonstrate the gameplay hook or sense of story that’ll leave you wanting to rush out and buy the full game right away (in any case, you’ll have to wait a little longer).

With little fanfare, this demo slips the player into the shoes of Darth Vader’s secret Jedi apprentice, Starkiller (a. k. a. Galen Marek), on a dimly-explained mission to kill a Jedi called Rahm Kota at an Imperial shipyard. Given that the game is part of a massive, multi-media set of products that includes a novel written by Sean Williams, a comic book, and action figures, this demo would have done well to spend more time establishing its milieu. Everyone knows what a Jedi is and does, but the hero is a new major character, and his place in the Star Wars universe is not immediately clear. It’s especially confusing to step into a range of enemies from opposing factions, fighting you and each other at the same time. Whose side is Starkiller on?

The environments are a pleasure to behold, if not to explore (the demo is thoroughly linear). The textures are rich, lighting effects have been applied skillfully, there’s a wealth of background detail, and the more open areas have a suitable sense of epic scope. It’s astonishing to think that this will also appear on Wii, PS2, and even Nintendo DS, the last two of which look set to waste the work that’s gone into the visual design. (Check out the gallery below to compare the PS3 and PS2 visuals.)

The big gameplay feature of The Force Unleashed is its hero’s ability to use some awesome force powers, and these are suitably satisfying. Force push will blast a way through crowds of enemies, lightning will zap them to death, and you can use the force grip power to throw human enemies into the shipyard’s unending depths or launch large objects at TIE fighters and other iconic Star Wars military equipment. God of War style rhythm-based finishing moves for large enemies are in also present, as you will see in the concluding confrontation with an AT-ST walker that Starkiller can slice in half with his lightsaber.

Aside from this, the combat system does not feel especially deep, original, or memorable. You will have button-press combos at your disposal, but this is standard action-adventure fare, and the force powers will usually have you feeling your enemies are thoroughly outmatched. The controls don’t feel especially precise—it’s far too easy, in the midst of battle, to blunder off the side of a walkway and fall to your doom. That’s when you’ll notice how far back the last checkpoint was, or how frustrating it is to have to wait for an entire area to load again even though you’re starting again within view of where you died last.

But though the demo does reveal some shortcomings, it’s easy to feel a sense of anticipation for what’s showing itself to be a high-quality gaming addition to the Star Wars universe. While there’s nothing here that will make history in terms of gameplay, even with the force powers taken into account, the production values are extremely high, and The Force Unleashed looks set to deliver an authentic and gratifying Star Wars experience. And that’s enough to carry any game this side of Masters of Teras Kasi.