Ian Ironwood, The Manosphere! How the Red Pill, Game, and the Internet are Revalorizing Masculinity (2013). 4/5. 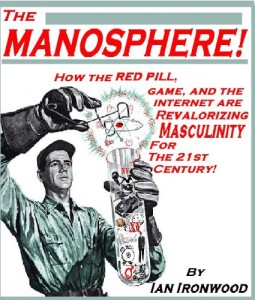 After failing to be interested in it at university, I’ve been discussing gender politics with friends online since early 2013. Check out the “gender” category on my blog for some examples. To sum up, I find much of contemporary ‘feminist’ discourse sexist, poorly reasoned, censorious, and contemptuous of the facts—a discredit to the name and to the people who rally behind it.

When I disagree with a thing, I make sure I do my research, and in the past twelve months I’ve read rather a lot in a feminist vein and in opposition. Ian Ironwood’s The Manosphere! A New Hope for Masculinity falls into the latter category.

Agree with them or not, contrarian thinkers often seem fresher and are more fascinating than adherents to the current orthodoxy. “The manosphere” is an after-the-fact grouping of a range of men’s subcultures, from those of men’s rights activists (MRAs) and pick-up artists (PUAs) to gay men attempting to create a masculine identity amid a culture that expects their feminization. I first came into contact with the term through a friend with an interest in the broader ideological movement called “neoreaction”—which some consider the manosphere a part of.

Writing in the manosphere is often unruly, raw, and confrontational, even downright offensive. This is not the realm of New York and London big-5 publishing, but of group blogs and self-published e-books. I hope we are beginning to move on from disdaining such work: as it was back in the mid-2000s when I was a videogames researcher, many writers with the best feel or most interesting take on the available material are doing their work outside of big-name journals, sites, newspapers, and publishing houses.

The rise of independent publishing helps the emergence of such movements and writers, giving them retail exposure without a publisher as gatekeeper and intermediary. As thriller novelist Michael MacConnell writes (link), there is an indentifiable left-wing bias among writers on average. It is tempting to speculate that this is entrenched by the ability of left-biased publishing-house staff to deny authors who do not share their prejudices access to the channels they control.

Ironwood’s is a self-published book, and its rawness comes in the form of several repeatedly misused words, and a range of other not-too-prevalent mistakes. I’ve come to accept this sort of thing as part of the indie publishing landscape, provided that it doesn’t compromise readability—and this is by no means unreadable or poorly written. Further rawness comes from its sources: the aforementioned blogs and e-books rather than academic journals and the canonical texts of gender politics. Ironwood also anticipates that readers of a feminist bent will take offense to the material, and makes little apology for that.

The book is less Ironwood’s own statement, though, than it is a summary of the different subcultures within the movement, the bloggers that represent them, and the ideas that they hold. Here we see MRAs and PUAs covered, as well as Christian conservatives, “old married guys” (OMGs), alpha dads, puerarchs, and “men going their own way” (MTOW). All of these are identified as part of “red pill” culture. The term is taken from the original Matrix movie, and here signifies a willingness to accept and act on the basis of uncomfortable truths rather than the myths of a politically correct orthodoxy, which are intended to subdue you.

Such “truths,” in the manosphere, tend towards:

Dismiss all this as misogyny if you like, hopefully with an awareness that the word now means “counter to feminist orthodoxy” more often than it refers to genuine hatred or denigration. That dismissal is so predictable it can be taken as given. What’s more interesting here are some of the other discoveries to be made:

Let’s sum this up as simply as we can: the manosphere is about men being comfortable with their own gender identity and sexuality while pursuing good health, prosperity, and independence.

Given this, it’s somewhat inevitable that manospherians spend time criticizing feminism and feminists, which feminist commentators accuse them of spending too much time on. Why? Because manospherians’ view of feminism is that it means women serve their own interests while men also serve women’s interests.

The problem is, much contemporary gender feminism attempts to recover these goods while denying them to men—particularly the assertion of a positive sexual identity. Just one loathsome example of contemporary comment, written by a man, insists that modern men are trained to hate women. Really? I never was, and I never did.

In fact, I have since childhood been exceptionally comfortable with women and interested in them as people, and regarded them as my equals, a situation I’ve viewed as totally compatible with my interest in them as sexual partners. Precisely because of this, and the apparent necessity of mentioning it in my defense, the repeated insistence that, I and my male peers must in some way hate and fear women, be oppressing them, or be constantly enjoying a privilege that we are obliged to apologize for, has made me decreasingly sympathetic to contemporary feminism and calls for attention to women’s interests.

Magnify that for confirmed manospherians. Against a feminism that pursues specifically female interests to the exclusion and detriment of men’s interests, the manosphere’s subcultures raise their banner: “we are men pursuing our own interests and valorizing our own sexual identity.” And they will pursue those interests against the interests or claims of women if necessary.

If feminism is reasonable in calling for female self-determination, it then seems reasonable that men might attempt to do the same.

Though I don’t recall that Ironwood says this explicitly, one of the tantalizing offers that the manosphere makes to men is this:

Men don’t have to do what women want them to do. Or, for that matter, what anyone else wants them to do.

And not only can you do what you want, but, so the red pill observation goes, you will get laid more if you do, because women are attracted to assertive men who are in control of their own lives and don’t submit excessively to external demands or goals that others have set. And not only that, but it’s fine to view getting laid more as a goal. It looks like that’s what male sexuality is about, and it’s fine to be a man.

In the manospherian view, men don’t have to:

Through his survey of the manosphere’s subcultures, Ironwood repeatedly gave me this kind of lightbulb-over-the-head moment where I understood that there is actually no deep moral or rational obligation for me to be on-board with the contemporary gender-feminist project, or to make apologies for my sex, sexuality, or rationality.

This should all sound hauntingly familiar: it is a mirror of some feminist outlooks. And it should be viewed as perfectly logical and defensible that, in a world where women make these assertions, men will make them, too. If we don’t like what is in the mirror, we should also look critically at what it is reflecting. In contemporary feminist and masculinist culture, there is a lack of concern for the other, and for society at large, that some (myself included) may find disconcerting.

Similar in this regard to Neil Strauss’s The Game, Ironwood’s book is an illuminating tour of male subcultures, albeit with an identity-political bent. It will fascinate most, offend many, and empower others.