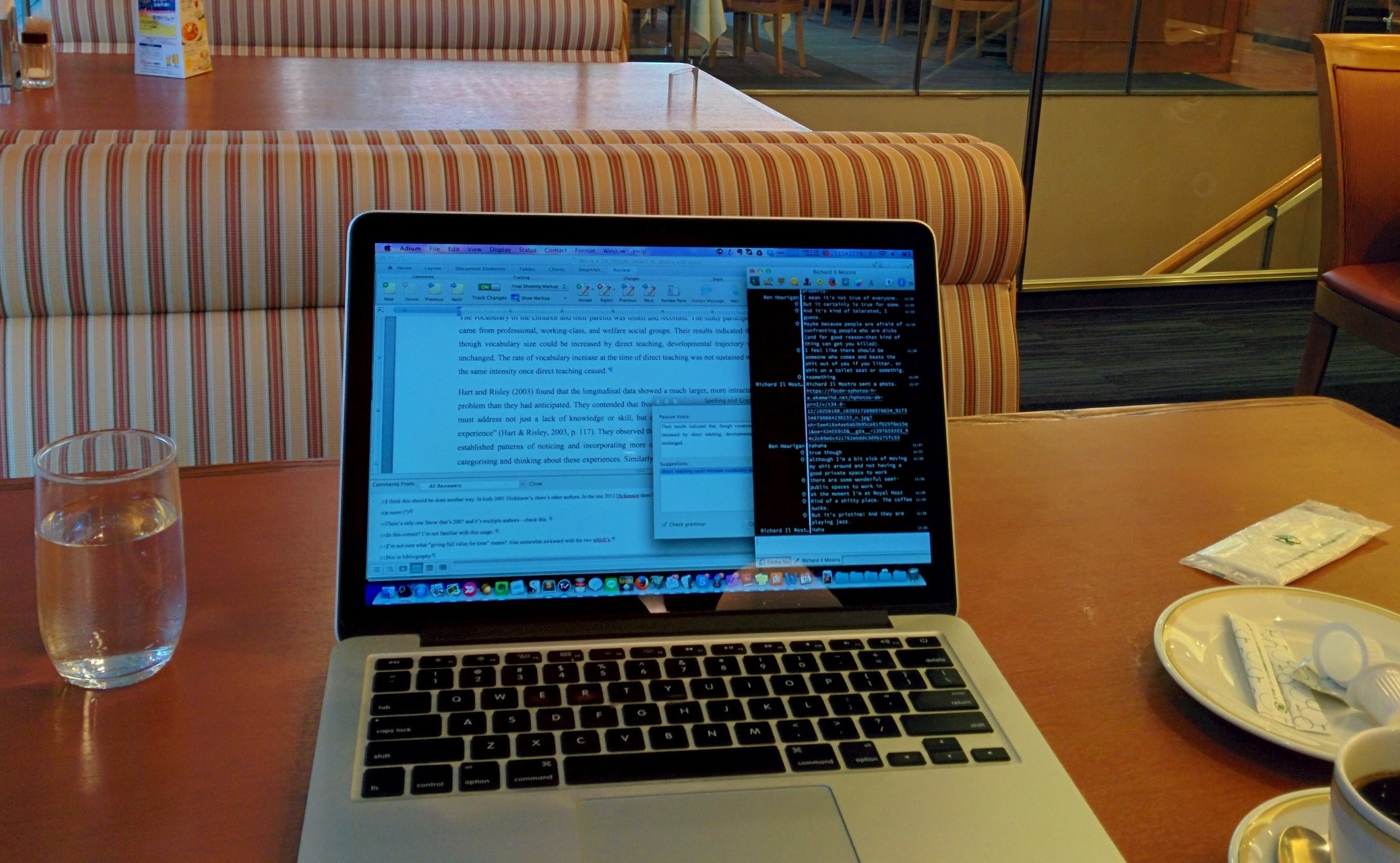 Fellow writer Julie Farthing posted yesterday in the E-Pub Extraordinaires group, which I’m a part of, talking about the challenges of finishing a book, and lifestyle changes she’s undertaking to make writing easier. She also asks “how others are travelling on their writing journeys,” and tags myself and author Lynette McClenaghan.

So, how am I travelling?

On the face of it, things are going very well indeed. I quit my full-time job last September, but not for the reasons everyone might expect of a writer.

Mention of me in newspapers across Australia led to several requests for self-publishing help. I had been freelancing since 2004, and a combination of job-induced depression and a strong desire to work for myself, not this new area of my business, were what drove me to leave employment, but services for what I’m now calling “assisted self-publishing” now account for the majority of my revenue at Hourigan & Co..

Granted, in the previous financial year I was working full-time as the manager of a magazine company’s digital media business, and running my own freelancing operation. It is a great relief to now only have to two jobs to do (freelancer and novelist) instead of three, and that I got to ditch the one I liked the least (disempowered manager).

I’m not the only person reporting this drop after a career switch: indie publishing advocate J. F. Penn reports that “After 2.5 years, I’m currently earning about one third of what I was making as a business consultant.”

Arguably, I work harder for my $30,000 than I ever did for the $80,000 a year that I picked up from my old job. As a freelancer, I only get paid when I’m making things, and when that time is on the clock. My clients are mostly individuals rather than institutions, and as such their ability to pay for services is relatively low. I do a lot of work for free when projects run over-time and when I’m researching new production techniques. At my old job, I’d get paid even if I was wasting time in circular discussions at the boardroom table, giving advice my boss wouldn’t listen to, or building products that would never ship.

For those thinking of giving up their day-jobs, I caution you: first understand how sweet it is to suck the milk of an institution.

It strikes me from time to time that in the previous few years I might have maximized my writing output by giving up freelancing, adopting a strictly 9–5 stance towards my day-job, and refusing to take time away from my keyboard for relationships that were often unsatisfying or beset with drama.

I quit my job to find more time to write. Sometimes it’s worked. In the first few months I was finding two or three hours a day to write. In the past two, I’ve frequently been so busy with freelancing that I’ve had no time to write.

But I have discovered something else about myself in two years discussing work-induced anxiety and melancholy with my psychologist, followed by seven months without that burden on me: my freedom is extremely important to me. I’d almost go so far as to say that anything I do professionally from now on must obey the condition that it preserves:

I am free. It does not necessarily mean I am writing more. But it does mean I am happier than I was.

How the books are going part 1: Sales

It should also be said that while I now make my very modest living in large part from my reputation as an author and independent publisher, hardly any of this is from book sales. As my Booktrakr dashboard reports, my career earnings as a novelist now stand at roughly USD 606.01 since 15 September 2011, with 369 copies of my two books sold, and 14,135 free downloads of Kiss Me, Genius Boy. This is in spite of the reviews I’ve received being very positive.

I’ll take responsibility for this: one of the key lessons from two years of being an independent author is that without marketing, no book will sell. It is simply very difficult to get the word out there skilfully and effectively, and I have not done enough, or the right things. Nor have I, in the past, made it a priority to learn about how to market my work.

That’s changed a lot in 2014. With several self-published author clients to guide now, I’ve felt I need to master the marketing side of things. And I’ve seen some surprise successes: an experiment with making PDFs available for sale has one of my authors selling in excess of $1,000 worth of a single, short non-fiction e-book every month—albeit through skilful promotion to her existing networks.

In my reading this year I’ve come across some wonderful resources on production and marketing, which I recommend to everyone in this game:

I found Platt and Truant inspiring, and owe them credit for introducing me to Gaughran, whose two books are to be commended for their practicality. Gaughran’s advice on category placement allowed me to briefly reach the #9 and #10 spots in the Australian & Oceanian Literature category on Kindle: 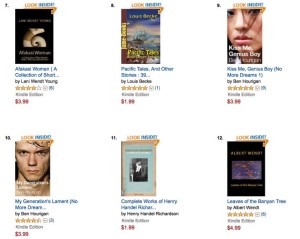 Other things I am planning to do, or know I should do, include:

One challenge that will remain, even with the above taken care of, is that the advent of self-publishing has made the market brutally competitive, rewarding few writers except expert marketers who are also prolifically productive. The same J. F. Penn article linked to above mentions that “you need more than 10 [books] to make a very good living,” and says that making those books are related (i.e. in the same genre) is a key to success.

I have to overcome my current block, which is that the freelancing that sustains me is keeping me from my doing what is necessary to make the writing pay its own way.

On that matter, Platt and Truant also introduced me to the motivational The War of Art by Steven Pressfield, which I highly recommend to all artists, especially those who frequently give in to procrastination or excuses and fail to get their work done.

Pressfield might say my freelancing is an excuse not to write—though I’d prefer to say it’s a revealing trade-off that shows being free is more important. If I’m to combine writing and freedom, I need to be more clever in my business, building volume, delegating tasks, and making it more self-sustaining. Here’s hoping it’s possible.

How the books are going part 2: writing

As far as progress on specific projects goes, things have been slow. I’m still revising Seize the Girl the third volume of the No More Dreams series. This has taken over seven months, though I’ve had on average only an hour or two every day to devote to it. Though again, I’m conscious that I’m making excuses, there are two things that have contributed to the length of the process:

The lesson in point 2, which I’d offer to any author, is simply to avoid writing in a fragmentary way. By all means, make notes about scenes that may go here or there. But finish that work before you start to write in earnest, order your thoughts, and set out to write your story from beginning to end in as straightforward a manner as possible.

As always, I treat writing as an infinitely deep learning experience.

The redraft is 99% done. What remains is to put the manuscript into a presentable format, send it to my beta readers, wait for responses and then revise according to the trends I see. All being well, I may be able to  release the book before my thirty-third birthday in September, some nine months after I had planned to have the book out there.

Then, at last, I’ll be able to start the next one. I’m looking forward to it.