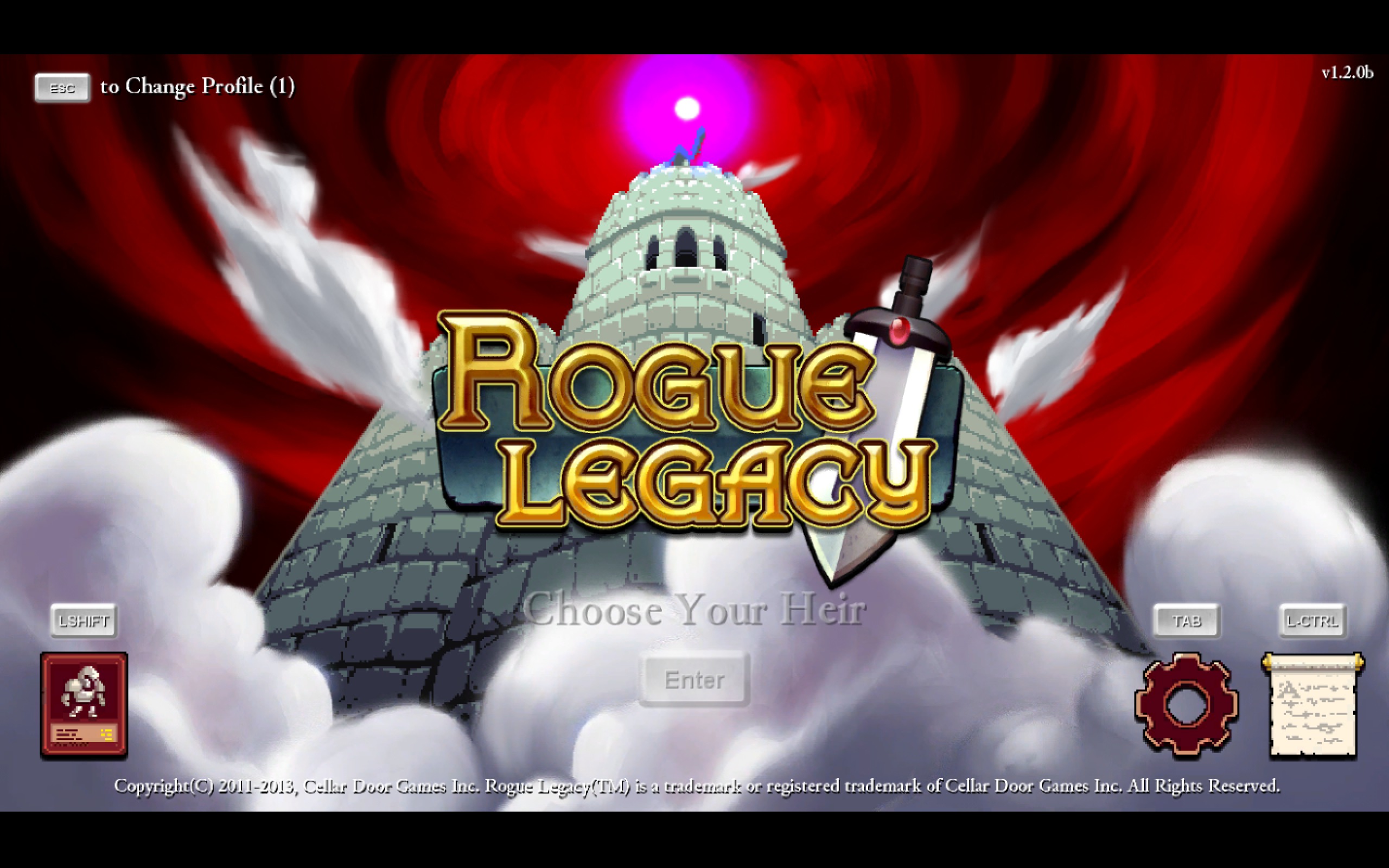 Since I’ve been living in Thailand, I’m away from my television and my consoles, so the only way I can play videogames (a longtime hobby of mine—I even did my honors thesis and an abandoned PhD on Japanese RPGs) is on my Android mobile, my iPad, or my Mac.

I’ve slowly grown more enamored with Steam, so much so that I announced yesterday it’s now my go-to point for games. I especially like knowing that if I change computing platforms at some point in the future, I’ll still have access to my purchases—which I can’t say about games I’ve bought from the Mac App Store.

Once I’d let everyone know I was on Steam these days, my friend Felix asked me what I thought of Rogue Legacy—which I’d never heard of. That’s now rectified. 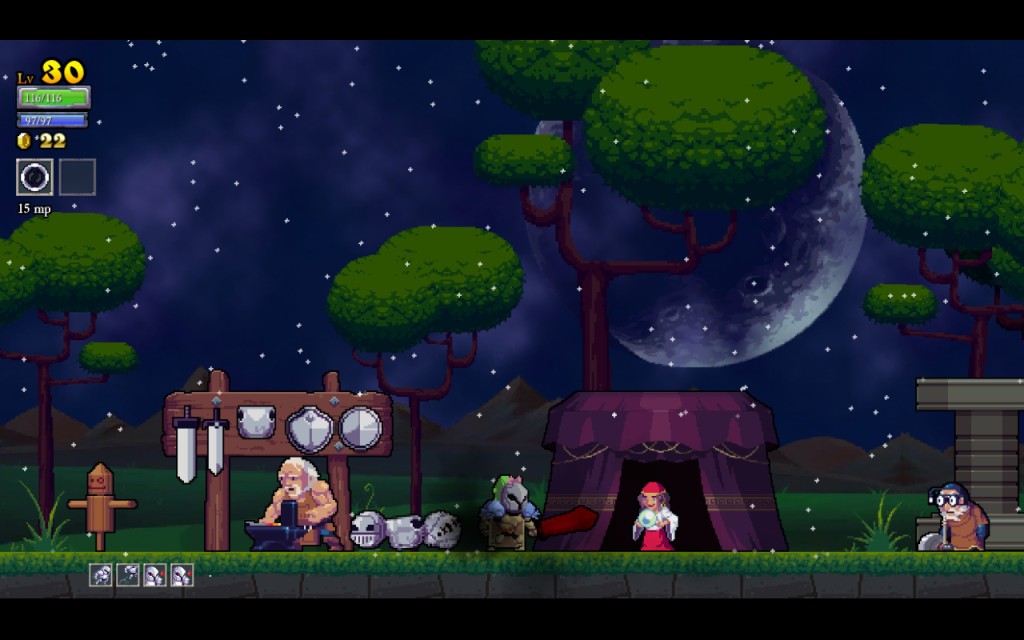 The art may remind you of Ghouls’n Ghosts.

Rogue Legacy takes inspiration from ancient text-mode RPG Rogue, which gave players an overhead view of their character’s progress through randomly-generated dungeons made of text characters. Rogue’s most famous recent descendent is the Diablo series, which reproduces its formula of random levels, loot drops, and simple, hack-and-slash gameplay.

Like Diablo, Rogue Legacy spices up the RPG formula with action elements. I’ve always liked the action-RPG idea, promising as it does to replace what can be rather boring turn-based battles with challenges to the player’s dexterity. It makes things more dynamic and fun—I think of how enamored I was as a child with Legend of Zelda II in comparison with the SSI Dungeons & Dragons games.

It also mixes the Rogue formula with a dose of retro, sprite-based design, and humor from its central conceit, which is that on death, one’s hero is succeeded by a descendant—likely afflicted with a hereditary disease. These diseases range from gigantism to IBS and colorblindness, and add different visual or gameplay features to each session—again, randomly. The character designs are also amusing, reminiscent (as I’ve read elsewhere) of Ghouls ‘n’ Ghosts. 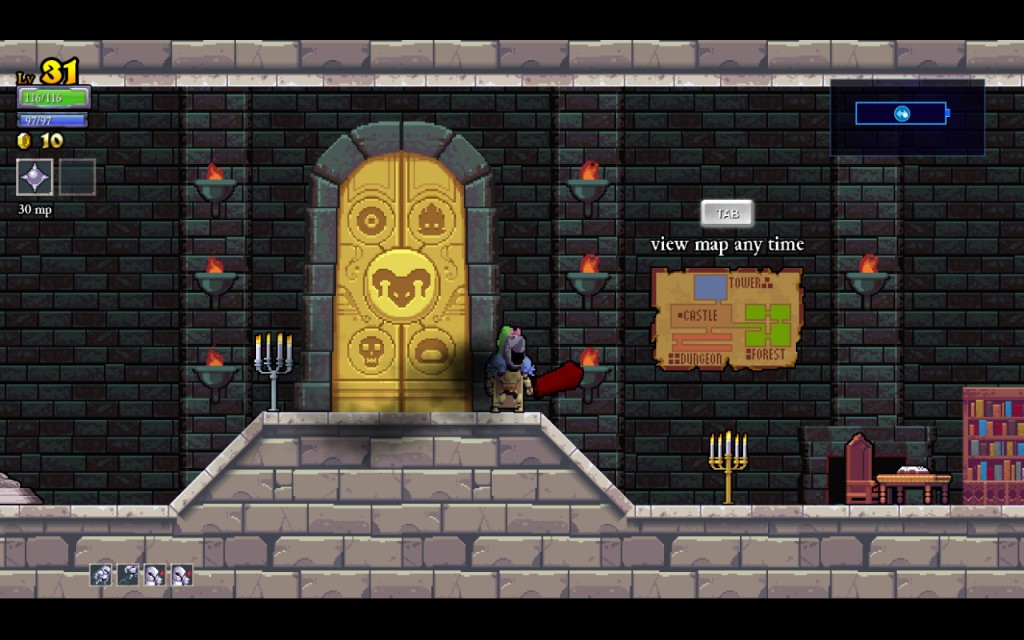 For a roguelike, Rogue Legacy includes a surprising amount of setpiece content, including bosses and this door near the castle entrance.

So—do I love it? It’s a qualified yes—with the main caveat being that I’m wary of how much of my time playing it could take up. After a few hours of play, I’ve settled into a groove with it where I’m always keen for just one more go.

But it took a while to arrive here. Now, I’ve accumulated enough stat and class upgrades by adding to my manor, and gathered enough extra equipment, that I’m starting to feel a sense of power and the ability to move freely throughout Castle Hamson, and even to make it some small way into the more threatening forest, tower, and dungeon areas that surround it. The first couple of hours, though, are frustrating: a low-level character with no upgrades will die quickly, often before collecting enough loot to buy anything that will make it possible to get further into the castle on the next try. 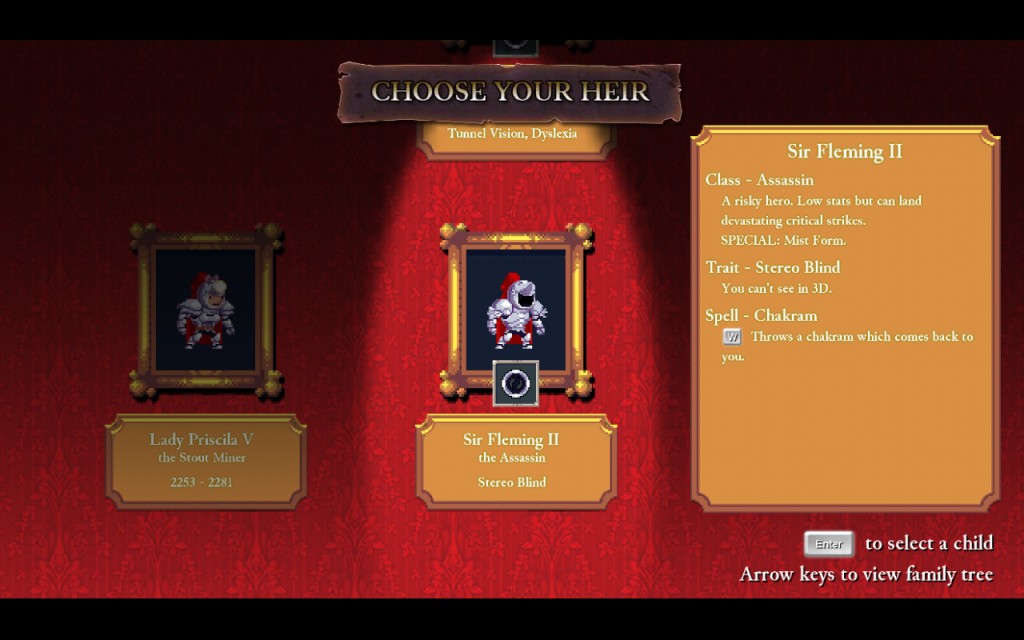 Die and you have to select a new hero—but they’ll start with their Daddy’s money.

The beginning player must rely on getting favorable castle layouts on a few playthroughs, that put chests full of money within easy reach, before they can break this cycle and reach a point where they can upgrade their manor or equipment after most deaths—bringing on that “one more go” feeling.

Though the initial frustration is a slight challenge to get past, it’s arguably worth it to make later upgrades seem more impressive and satisfying. Rogue Legacy makes you work to get to the point where the game is genuinely fun and engaging, and once you do—you’ll feel it was worth the effort.