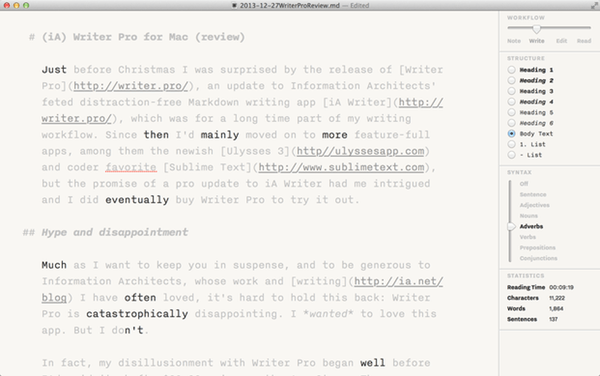 Just before Christmas I was surprised by the release of Writer Pro, an update to Information Architects’ feted distraction-free Markdown writing app iA Writer, which was for a long time part of my writing workflow. Since then I’d mainly moved on to more feature-full apps, among them the newish Ulysses 3 and coder favorite Sublime Text, but the promise of a pro update to iA Writer had me intrigued and I did eventually buy Writer Pro to try it out.

Much as I want to keep you in suspense, and to be generous to Information Architects, whose work and writing I have often loved, it’s hard to hold this back: Writer Pro is catastrophically disappointing. I wanted to love this app. But I don’t.

In fact, my disillusionment with Writer Pro began well before I’d paid its hefty $20.99 price on the App Store. The promotional videos for the app are so self-important as to be ridiculous. Had I not been sitting in the living room with my parents at the time, in the lead-up to Christmas, I would have laughed out loud. The video seems modelled on the Apple promos for new iStuff, where Jony Ive and others talk with gravitas about the design process leading up to the new product. The video for iA Writer Pro ramps it up a notch, overlaying it all with an anxiety-inducing piano soundtrack that evokes the sound of a clacking typewriter.

Now, I wouldn’t necessarily laugh at the gravitas. I’m typically excited about what Ive has to announce for Apple, though announcements for recent iPhones have given me a chuckle at times. The iPhone 5 is taller? Really? That’s your response to the vastly more usable 4–5 in form factor adopted by the most high-profile Android phones?

It was the paucity of features I thought I’d find genuinely useful in this update, combined with the deadly earnest expression of the developers’ belief that iA Writer Pro is revolutionary, that gave rise to laughter. iA Writer Pro:

It was two days, as a result, before I decided that there had to be more to iA Writer Pro than that, and paid the $20.99 for the Mac version.

Writer Pro’s most obvious new feature is the addition of a sidebar that controls major functions for writing in Markdown.

This sidebar has four sections:

Most of these functions are also available through keyboard shortcuts if the sidebar is off, which is welcome.

The workflow slider is essential to iA Writer’s flawed general premise, but can hardly be viewed as a positive addition.

The structure buttons, on the other hand, will help newcomers to Markdown discover how to add structure to their documents while they learn the markup. iA Writer has long been one of my first recommendations for Markdown newbies, and if anything, the sidebar in Writer Pro improves on its suitability for these users. Yet after a period of time, the buttons become redundant: why move your cursor to click a button for Heading 1 when you could type “#”?

Syntax Control, the most hyped feature of Writer Pro in the promo videos, is also the strangest. Writers fond of the advice that one should avoid adverbs (and sometimes even adjectives) if possible may find the highlighter useful to expunge these superfluities from their work.

I admit that I actually did use Syntax Control while editing this review, and found the adverb highlighter particularly useful, even if it sometimes get things wrong (highlighter, for instance, is definitely not an adverb, but Writer Pro thinks it is). I may grow to think more highly of Syntax Control than I do.

Yet overall, to a native English speaker the focus on parts of speech in Syntax Control seems counterintuitive. Just why would I need to see all the verbs in my document highlighted? The development team’s answer to this is that with Syntax Control you can scan your work for repetition, as though this were the chief evil in writing.

Syntax Control looks to me like a solution to a nonexistent problem, and that this central feature in the new app is relatively weak is one of the clearest indications that the app as a whole is inadequate as a step forward, particularly at its price point.

Finally, the statistics panel is an act of outright vandalism. It’s now the only way to get those counts for words, characters, and so on. While that might seem okay, you may well cry when you realize that if you turn the sidebar off to get back to the original iA Writer’s minimal presentation, the counts no longer appear at the bottom of the window or screen when you move the mouse. If you want the counts, you can clutter your screen with the whole sidebar … or you get nothing.

Note, write, and edit have their own fonts, while read uses the sans-serif font already introduced in edit mode.

Another review of Writer Pro points out that if you are saving your documents in iCloud, it will also change the folder that the document is in. Comments on iA’s support forum demonstrate that though there is a certain invisible depth to these modes in the way they handle files on iCloud, users (including myself) can’t easily understand how it works or exactly what it is doing and why.

For many these file-management features will be an an annoyance or an irrelevancy, particularly if they like to edit their Markdown files in multiple applications and so avoid iCloud, as I do.

Occasionally you would hear around the internet requests to be able to change the font in iA Writer, and finally you can do it! Writer Pro keeps the excellent typographic presentation of the original iA Writer, but now gives you three different font options. In addition, there is more nuanced Markdown formatting that makes a visual distinction between heading levels.

Yet—wouldn’t it have been intuitive to serve this request by adding a font selector to a menu or a preferences dialog?

Although it’s thrown at users a bunch of solutions to problems that never existed (the need to select a mode depending on whether you’re taking notes, writing, or editing; an inability to highlight the conjunctions in a document), iA Writer Pro ignores some of users’ long-running feature requests. It’s also missing some features that you’d expect from a pro-grade Markdown writing app.

Over the years, I’ve seen numerous requests directed at the iA Writer Twitter account, including some of my own, that ask for a dark mode, with light-colored text on a dark background. The official response has been “press Fn+Ctrl+Opt+Cmd+8 to reverse your display’s colors”. This comes with a few nasty side-effects, including the presence of bright pixels at the screen corners if you’re in full-screen mode.

Years on, and a $20 paid upgrade later, and iA Writer users have got a bunch of stuff they never asked for, but there’s still no dark mode.

One of the main reasons I don’t use iA Writer regularly at the moment is that I’m in the middle of editing a 110,000-word novel, and for that I need to be able to jump around my document to my different chapter and section headings.

This need for outlining has driven me to more full-featured text editors and Markdown editors, including Textmate, Textastic (just $8.99!), Ulysses 3 and the multiplatform Sublime Text.

There’s a backlash against Writer Pro on iA’s support forums right now, and it leads me to hope that the developers might change their direction and move Writer Pro more toward being a capable (and dare I say conventional) app that warrants its “pro” designation.

While it’s certainly against iA’s ethos to turn Writer Pro into a full-featured text-editor laden with menus and syntax highlighters, incremental upgrades to its core features may have been worth paying money for:

Until or unless iA starts thinking about adding features such as these, some of which have been desired and asked for by its users, instead of making bizarre revolutions that shuffle people’s files without telling them, and cluttering what used to be a pristinely minimal user interface.

These days my main writing environment is Sublime Text, a cross-platform text editor designed for coders with robust navigation features which is also easily extensible with a unique package manager. While for many Sublime Text would be overkill, these days I almost can’t live without being able to hit Cmd+P and zip over to another chapter without taking my hands off the keyboard.

In addition, I’ve been spending time with Ulysses 3, which also has an outline viewer, and distraction-free modes that parallel Writer Pro. Ulysses 3 is distinguishing itself these days with robust export options and a template language inspired by CSS, and is now my preferred environment for creating ebooks from finished manuscripts.

And there’s still iA’s original distraction-free writing app, iA Writer, not quite as polished in some ways as the new Writer Pro, but less cluttered, easier to understand, and only half the price at $9.99. Superior in some ways to its successor, iA Writer is the drawing board its developers may need to go back to.