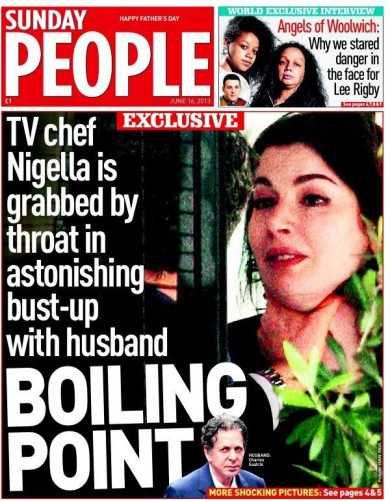 One question could have settled this: “What’s going on here?”

People love to defend the weak and be outraged about injustice. At its best, this is an admirable trait. It can lead to heroism on behalf of well-considered causes. But it can also lead to unwarranted intrusion into people’s private lives, and to hasty accusations. It can lead to condemnation of the innocent without a fair hearing, and to arbitrary punishment by vigilantes, mobs, and tyrants.

Like many boys, I play-fought with my father and my brother when I was a child. One weekend afternoon, when I was thirteen and getting strong enough that these playfights had become uncomfortably serious business, I mis-aimed a punch and landed it on my father’s hip. An X-ray at the local hospital showed the painful impact had fractured the metacarpal bone of my right little finger, and I arrived at school on Monday with a splint on my hand.

My English teacher, a woman in her late twenties, asked me what had happened.

“I was fighting with my Dad,” I said.

In the months after that, I received no end of enquiries about whether everything was alright at home, even though my teacher’s first reaction to the story made me clarify: we were play-fighting.

Fortunately, my teacher had sufficient discretion that she never made the incident a problem for me or my father, as it had no reason to be. Though I guess she continued to have her doubts about the story, she must also have understood that things aren’t always what they look like.

Not only have I been in a position to look like a victim of domestic violence; I’ve also been in a position to look like a perpetrator. In seventeen years of dating and being sexually active, I’ve had relationships with a small number of women who are mild sexual subs, and many women who have been lovers of irony, absurdity, and dirty talk. Behind closed doors, I’ve had my hands on a woman’s neck, to hold her down, at her request. I’ve also removed them when asked. Had someone listened at those doors, or happened to catch a glance of something through a window, they might have drawn the conclusion that something seriously bad, even something worthy of reporting to the police, was underway.

But they’d have been wrong. Things are not always what they look like.

Today there are photos on the internet of Nigella Lawson being roughly handled by Charles Saatchi. It doesn’t look like she’s having a good time, and there are anecdotal reports of her distress. And yet 3AW presenter Dee Dunleavy chides Nigella for “cowering from a thug,” calls Saatchi “a man so boldly abusive he had no qualms about attacking you in public,” asks why onlookers “did nothing to stop the attack,” and implores Nigella “to make a stand on domestic violence.”

Dunleavy likely has good intentions. We are, arguably, in the midst of a moral panic about violence against women. She wants to stop bad things happening. But such good intentions can be dangerous. When they lead us to make assumptions about alleged occurrences that we believe to be unjust or even criminal, they risk removing people’s control over their own affairs, and destroying the reputations of people who may be innocent.

Reserving judgment instead of leaping to conclusions before the facts have been properly established is even more important now that we live in an environment of almost total surveillance. Within a week of Edward Snowden revealing that the US government is doing warrantless, dragnet surveillance of phone and internet communications on a massive scale, we see Saatchi on trial in the media due to photos taken in public, without permission, scrutinized, analyzed, the whole story told and dissected without either party to it telling even one side of the story.

To some there may seem no need to bother with patience or even the simple question, “what happened?” when the whole thing can be settled in a matter of hours by well-meaning zealots with a tabloid newspaper on their computer screens. But when we live inside a system where, in Snowden’s words, “they can … go back in time and scrutinize every decision you’ve ever made, every friend you’ve ever discussed something with,” to “derive suspicion from an innocent life and paint anyone in the context of a wrongdoer,” to indulge this mentality risks one’s own safety as well as the safety of others.

Dunleavy’s political outrage is, at least, preferable to the lurid speculation published in the Daily Mail, where one onlooker began to imagine a detailed emotional scenario in which

She had a real look of fear on her face. And yet she kissed him. She appeared to be a woman who loves him but was clearly unable to stop him being abusive, frightening and disrespectful to her. (Link.)

A spokesperson for the restaurant where the photographs were taken told Sunday People that “we do not comment on the private matters of customers.” Their discretion is a model many–including myself–would do well to follow, until Saatchi or Lawson decide they want to make a public statement about the incident, if ever.

Sometimes things are what they look like. If that’s the case here, maybe we’ll find out. Let Saatchi and Lawson own their lives and the story that is told about them.

Update: Saatchi’s public statement — “We had made up by the time we were home. The paparazzi were congregated outside our house after the story broke yesterday morning, so I told Nigella to take the kids off till the dust settled.” Same story says Nigella’s agent declined to comment.