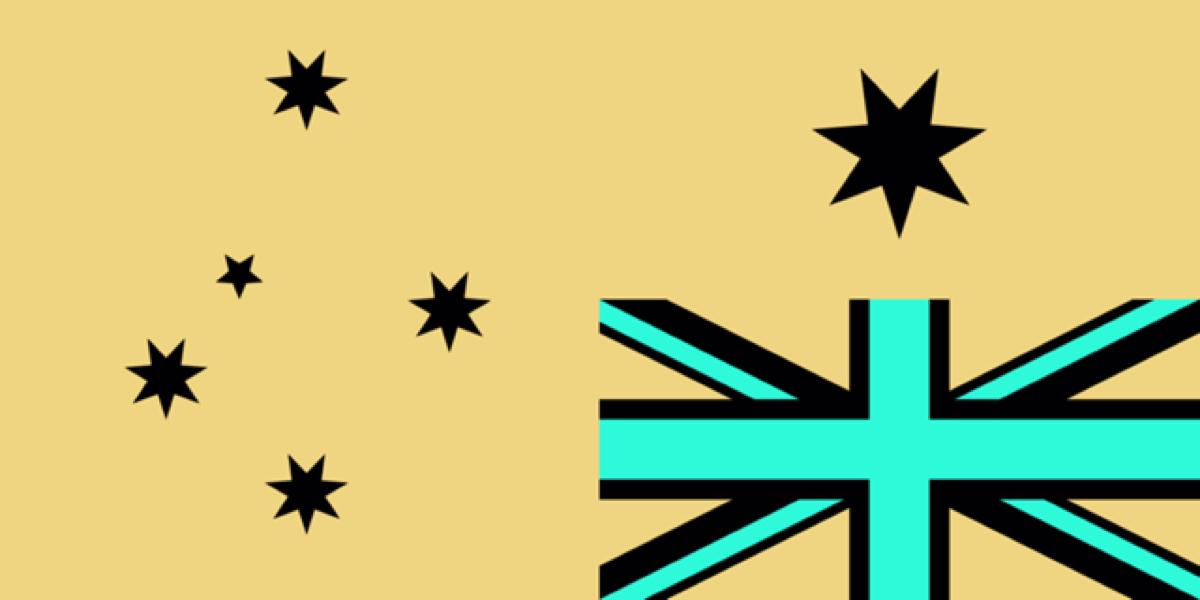 My proposal for a new Australian flag. Ew.

It’s Australia Day today, a deplorable festival of nationalistic sentiment. Today many people in my country pull out their flags and celebrate an artificial, state-sponsored distinction that divides them from the other people of the earth, and keeps people and things from moving freely across the globe. Today we celebrate the symbols of overblown government that regulates our private behavior without our consent, and a number of distasteful cliches about what constitutes the national character.

I recognize that this is an antagonistic position, and it’s worth pointing out that at this point in my life, I don’t actually let the day bother me much. I wouldn’t ever celebrate Australia Day, but I’m happy to sit at home, listen to the Triple J hottest 100, and basically ignore it.

That is, until people start wheeling the racism out. The kind of circles I move in generally consider themselves educated and enlightened, which can, unfortunately, means bashing “white” people and considering it sophistication. It’s not something everyone indulges in, but there’s always one.

This particular Australia Day I was enjoying a friend’s Facebook that gently poked fun at our national holiday, and participating in an exchange of humorous comments when someone posted a racist comment, and this happened:

X: Then aliens took all the white men away and everything was okay again. Actually I probably dreamed that bit.
Ben: Racism is bad whoever its aimed at, X. Lift your game.
X: Sorry, Ben. I know things have been hard ever since you lost the colonies and those slaves.
Ben: I repeat. Lift your game.
X: No, really, I’m very sorry to have reminded you of those terrible experiences of owning land and people.
Ben: X, please examine your reasoning. I never owned land and people. Also, don’t forget that “white” people were also on the other side, and developed the philosophical discourse of human rights that underpins the anti-slavery movement, as well as movements against other kinds of oppression. Whiteness has nothing to do with it, and to suggest so is racism pure and simple.
Host: I understand that there is a lot to discuss here, but I would appreciate you moving this to another thread. I am not interested in hosting heated arguments.
Ben: That’s okay. I’m not interested in having a heated argument. Just also not interested in letting predictable, fashionable attacks like the above go un-noted, so that it appears they are tacitly endorsed by all. By saying it’s unacceptable, that basically exhausts what I have to say on the topic.
X: Sure, I love being told what racism is and isn’t by someone who belongs to a race that has systemically oppressed other people for centuries and then whines about why everybody clings to this “historical context” crap.

While I was tempted to tell X that I’m black and see how he responded, my heritage on both sides of the family is almost purely Celtic, with a tiny bit of European Jew mixed in from my mother’s side. I burn easily in the sun. I’m white, let’s face it.

I have to laugh at X’s comment that he loves “being told what racism is and isn’t by someone who belongs to a race…” which by abusing me on racial grounds is as clearly racist as anyone could be. I prefer to take a humorous view of these things than anything else. Poor reasoning is absurd. But I would also like to claim my right to take offense. I think slavery is deplorable. If I’d been around in the era of slavery I’d like to think that I’d have been on the side of the abolitionists. To assume that I’d have been a slaver because of my race is an unjustifiable slur.

It’s not said often or clearly enough that reverse racism, that is, racism aimed at a formerly dominant “racial” group, is still racism, just as reverse sexism, in which men are presented as misogynists and rapists, is still sexism. I’ve made a personal decision that when I see either of these happening I’m going to call it out–I’m going to mention that I find it offensive, and condemn the behavior as unacceptable.

We live in a multipolar world, that contains diverse powerful groups, in which reverse racism is as tired, as irrelevant, and as ugly as the white anti-colored racisms that preceded it.

If you feel like being oppositional–and there are plenty of good reasons and ways to be upset with the status quo–there is no need to resort to the late twentieth century’s misguided identity politics, which has now become the dominant focus of political discourse. There are older traditions: liberal, socialist, and humanist, which have a clear view of the intolerability of coercion and of race-based hatred, that recognize our shared humanity and insist that we’re all in this together.

So throw your racism in the trash, burn a flag, and celebrate being alive and human, a condition that transcends colors and borders.