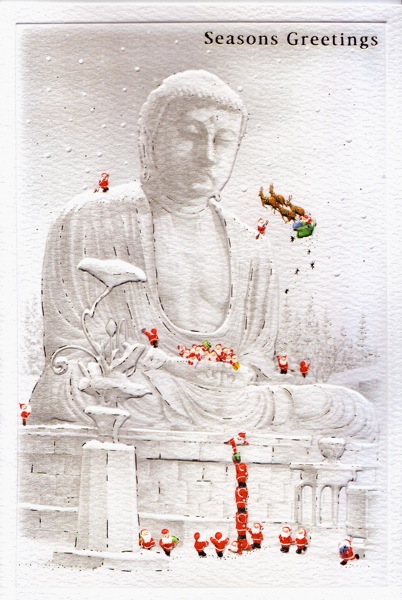 A Japanese Christmas card from 2005

Happy Christmas, everybody! Strictly speaking I’m a Buddhist/agnostic/Nietzschean anti-Christian, but I’ve long since stopped bothering to make a big deal about it and settled into unproblematically enjoying food and family with the believers and the unthinking. May you all have reached a similarly relaxed accommodation to the world.

This was my Christmas message to fans of my Facebook author page, and it got a few interesting replies.

Love your ideals and beliefs there, Ben. Agnostic, Nietzschean, anti Christian. Very intriguing. We should chat! What are thoughts on existentialism? Do you think Nietzsches beliefs in any way followed existentialism? I find his theories on ‘god is dead’ and nihilism a little difficult to comprehend but would love to chat about them some time.

And to her, I responded by saying that existentialism’s one of my favorite kinds of philosophy. I include Nietzsche (though he might be a bit early for that), and also Kierkegaard, whose Fear and Trembling made a big impression on me. One might look at “god is dead” as simply saying “god is irrelevant”–man has now been left alone, and must first break the old rules and patterns of behavior from the era of the godly, then live into the empty space beyond them. Life isn’t worthless (this is what I would see as nihilism); how you live does matter, but any meaning or purpose that exists within it is purely your own creation. There’s joy in that: what life will be is substantially mine to choose!

Insofar as I’ve ever called myself a “Nietzschean anti-Christian,” it’s on the basis of Nietzsche’s identifying Christianity (as shaped by Paul) as a doctrine that hates life, pleasure, and the body, and that condemns the believer to a slave’s morality and a life of timidity, self-hatred, and submission.

ST, of Georgia (that’s the former USSR, not the United States), then pitched in:

Why are you anti-Christian? I am Christian (Orthodox), and I don’t hate life, pleasure, or the body, but sometimes it’s necessary for my health, soul and willpower to keep the faith. Thanks for listening.

To Sandro, I should explain–I actually consider myself a religious person (Buddhist), and I’m certainly not against religion as such. Nor do I take a very hard stance against Christianity. But I do find Nietzsche’s analysis of Pauline Christianity as life denying quite compelling, and I do see strands of that in some branches of Christianity.

I was raised a Catholic and I found some aspects of that quite negative, but I also see positive things in the Catholic church as well as in some branches of Protestantism, especially the revisionist theology of Bishop John Shelby Spong. I also find inspiration in Kierkegaard’s writings on faith, which I think are useful for non-Christians (including atheists)–the idea being that a belief in the potential for seemingly “impossible” things to happen allows you to live life in a more daring, and sometimes less anxiety-prone, way.

If you’ve found a positive approach to Christianity, or to life in general, great! That’s an excellent thing to celebrate at Christmas.