I sometimes wonder if people consider me an Apple fanboy. The truth is something more like this: I’m a writer and publisher who works a lot with various kinds of text, some of it highly structured, in formats like HTML, LaTeX, and Markdown. I love open source, and things that work in a way that I consider well documented and that makes sense. For this reason, I love Unix, and hate Microsoft.

In a perfect world, I might run Ubuntu Linux on a System76 laptop, but I need Adobe Creative Suite for my print work, and I am in love with some beautiful, polished apps for writers such as the ludicrously simple iAWriter.

Plus, there is just no beating the build quality of Apple machines. Every time I buy a new laptop from them, I feel like it’s the best computer I’ve ever owned. Right now, I’ve got an old 11″ MacBook Air, which I got back at the beginning of 2011 and which only has a minuscule 2GB ram, a positively antique Core 2 Duo processor, and a 128GB SSD. I’ve been dying for a new laptop, but I swore I wouldn’t buy one until a retina model that would fit in my bag came out.

So I anticipated today more than usual. But there’s no denying new Apple announcements alternately excite and disappoint me. The recent iPhone 5 bores the hell out of me. What about today’s raft of announcements?

Caution: surfing inside your computer may trigger its moisture detectors and void your warranty.

This is what I’d been waiting for.

Never mind that it’s a little underpowered, topping out at 8GB of RAM with a dual core processor and integrated Intel graphics, where its 15″ sibling is quad core, can go up to 16GB RAM, and has a more powerful discrete graphics card. The selling point here is a display as sharp as your iPhone 4+ or your iPad 3.

Non-Apple users often dismiss the value of these sharp screens–or at least, they used to before Android devices like the Nexus 7 began bringing high-DPI displays to the wider world. If you’ve used a screen like this, you’ll know how it makes everything else look indistinct. It’s a huge leap: the benchmark is now displays that are as sharp as the printed page. It poses a challenge for digital publishers: you now need larger, sharper images, and they’ll take up more space. Mostly, I want the retina screen, so that when I’m working on my novels in iAWriter or TextMate, the type is as clear and crisp and detailed as it is in the printed books I loved when that was the medium in which novels got around. But I also need the screen, at least just a little bit, because this is the way things are going to look from now on, and as a publisher I should be there just a little bit ahead of the mainstream.

I ordered one today. At AUD 2,199, I’ll concede it’s too expensive when compared with an ordinary PC. It’s also tax-deductible. I’ll call it, for me, a necessary expenditure. Hello, #firstworldproblems.

Today, this is the world’s most overhyped piece of obsolete techno-junk.

Let’s deal with this hot on the heels of the Retina MacBook Pro. Remember how I said “the benchmark is now displays that are as sharp as the printed page”?

Well, Apple’s new iPad mini misses that benchmark, with an inferior 1024 Ã— 768 screen like the one in the original iPad and the iPad 2, just smaller.

With the iPad 3 around, as well as the Nexus 7, the iPad mini, with its low-res screen, is an obsolete piece of garbage at any price.

I’m not even going to make a separate section for the New New iPad. Apparently it’s twice as fast and has a better camera. I never noticed any deficiency in the Old New iPad (iPad 3), so–yawn. But if you don’t have an Old New iPad, get a New New iPad. If you like Apple stuff, these are great tablets. Pass on the Mini until it gets a decent screen. 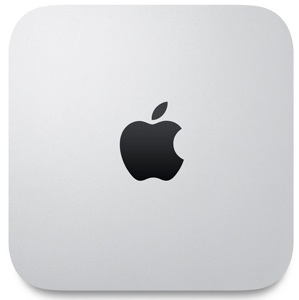 It’s basically just a small metal box. And that’s what makes it great.

I love the Mac mini. On my desk at work, I have an old one from back in the days where they still had optical drives, hooked up to a nest of cables as convoluted as the devil’s entrails, an ancient Apple Cinema Display, and an even more ancient 17″ Diamond View LCD. At home I have one running Plex, that plays movies and TV to my HDTV, streams music from Spotify to my stereo, and serves video to my iPad. At the office we have a few in the server cabinet. One of them replaced a Mac Pro that is sixteen times the Mini’s physical size.

I love that the Mac Mini is just a box that you can hide in and under and behind things. I love that it lets you bring your own peripherals to hook up to it. I love that it’s the only piece of Mac kit I have where you can still replace the hard disk and the RAM on your own (I took the 2GB that came with my home Mini, in two nigh-worthless 1GB modules, ripped it out and threw it in the bin, and then replaced it with two cheap 8GB modules, saving myself a few hundred bucks on Apple’s own RAM upgrades, which are a notorious rip-off). I love that I can put it in my suitcase and take it to a trade show interstate, and could as easily bring it with me if I moved to a different country.

Today, this box of wonder is a little more powerful. And at last, Apple is no longer selling it with 2GB of RAM by default, with which a current version of Mac OS will grind to a halt running all but the most rudimentary of applications. Cheers to that. 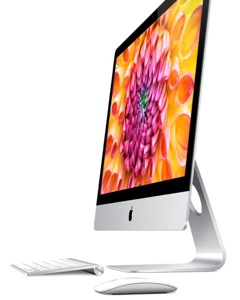 It’s only wafer thin. Sadly, they had to ditch the built-in VHS recorder.

My father never told me to buy an all-in-one. “If they break down,” he said, “you’ve got to get the whole thing fixed.”

He was talking about televisions with built in VHS recorders. But I found his logic compelling, and so I’ve never been attracted to the iMac. Why effectively buy an LCD from Apple when I could buy a bigger one from Acer or Samsung for less? Why get a hulking beast of a machine when I could have one that I can stash in my satchel in case, say, Australia gets suddenly taken over by Nazis and I have to flee? It could happen!

Because today the iMac turned into a beautiful swan. Before it was, perhaps, maybe not a hairy caterpillar, but maybe a duck: sleek and sturdy and efficient, but in a less than entirely transcendent way.

The new iMac is extremely thin. For this and no other reason, it makes me want to take the infernal cable nest in my office, of which I am perversely proud, and replace it with this nigh two-dimensional object, which will stand before me ethereal and pure.

If and when the economy ever gets any better, this is what I’ll be asking for on my desk at work.

And that’s all until next time, when I hope Apple will announce something I have not yet imagined (or maybe a worthwhile iPad Mini).