Some of you might be aware that big-name talk radio host Alan Jones has been under attack here in Australia recently because of comments that he made during a speech to a Sydney Liberal Club dinner, saying Australian PM Julia Gillard’s father (who did recently die) “died of shame” because his daughter was a […] 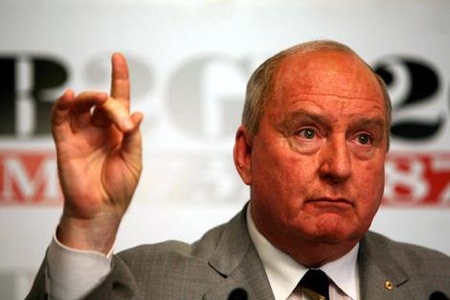 Some of you might be aware that big-name talk radio host Alan Jones has been under attack here in Australia recently because of comments that he made during a speech to a Sydney Liberal Club dinner, saying Australian PM Julia Gillard’s father (who did recently die) “died of shame” because his daughter was a liar.

These are horrible things to say, to be sure, and a fine example of the value of the fourth and sixth Buddhist precepts: “Do not speak falsely,” and “Do not discuss the faults of others.” In the days that followed the remarks, online activists have waged a campaign to have advertisers pull their ads from Jones’s show, and to have Jones himself sacked. A story coming through just now says that Macquarie Radio, which owns Jones’s station, 2GB, has just suspended all advertising on his show.

Also this afternoon, former Age columnist Catherine Deveny, who might do well to remember that she herself was sacked after a controversial tweet, has Facebooked a link to a survey on Jones that 2GB is running. One assumes Deveny’s intention is to have her fans, many of whom will not be 2GB listeners, to voice their disapproval.

I thought I’d do something different, in the name of forgiveness and civility. Here’s what I wrote:

I must confess, I don’t listen to Alan Jones, or to the radio at all, and I don’t engage with broadcast media of any kind: I think it’s a waste of my time.

However, I follow what’s going on through Facebook and Twitter, and I know that there’s been a campaign waged (where I see it is through Catherine Deveny, who is herself a lamentably uncivil commentator) to get people, many of whom I suspect are not listeners of 2GB, to target 2GBs advertisers and tell them of their disapproval of Alan Jones.

I think it would be a great shame if this kind of mob justice were to prevail. Alan’s remarks that sparked it, while in my view distasteful, were only remarks, and not intended for wide dissemination. We all overstep the mark sometimes, and we are all entitled to some forgiveness, especially for things that do no material harm. Although, I must say, for that you might expect a more sincere display of repentance than I’m aware Jones has made to date.

So I encourage you to stand your ground on this. There are some out there who want to destroy Jones’s career, and your station with it. Those people deserve to be called out as hatemongers in their own right. They have some bitterness within them, or a bone to pick, or some angry schtick to sell. Don’t give in to them. But also, don’t sell that schtick yourselves.