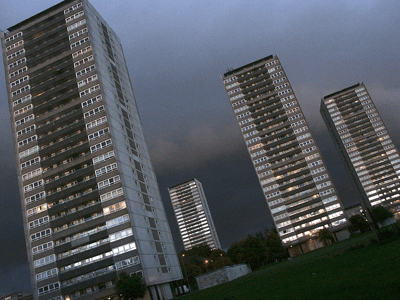 One for all the pro-highrise libertarians: How does a bunch of private and government interests colluding to destroy local amenity (and thus incumbent property values) further the cause of freedom?

I’m not sure that high-rise does necessarily destroy local amenity, although I’ll admit that it can. Some of you might be aware that I’m a Melbourne CBD-dweller, and here there are a range of outcomes.

In the area where I live, around the Queen Vic. market, there’s a lot of new high-rise apartments going up. Fortunately, this is in an area with a well-developed retail culture, so there’s lots of active street frontage and streetlife. The area is well-serviced by public transport, and many of the residents don’t have cars. This is true of many of the high-rise residential buildings in the CBD, particularly those east of Elizabeth Street.

West of Elizabeth, in Docklands and around Spencer Street, it’s a different story. Lots of the buildings are on podiums containing car parking and have little active street frontage. There’s nothing going on in the immediate vicinity, and no proper supermarket, so you need a car to live. In many ways, these places are worse than the suburbs that city-dwellers often malign: in Malvern, for instance, I had 3 supermarkets within a 20-minute walk. No such luck in some parts of the city. IGAs that charge $7 for a box of cornflakes don’t count.

Don’t even ask about Southbank and St Kilda Road: here, big podiums, zero active street frontage and an absolute reliance on car transport are the norm. The area is criscrossed by major roads, including elevated freeways. ‘Wasteland’ does not overstate the case. I’m not sure there was ever any amenity in the area to destroy, but I sure as hell wouldn’t want to live there.

I’d say the answer here is not limiting the amount of high-rise, but using government power to dictate the form high-rise has to take. I know this isn’t a particularly quantitative approach, but any idiot can see that a sort of new-urbanist approach (think Jane Jacobs and inner-city Paris) with high density (although this can mean mid-rise) and omnipresent active street frontage and public transport is the way to go. Buildings without active frontage should be banned, and there should be some solution worked out for letting everyone walk to a supermarket that charges less than $8/kg for tomatoes.