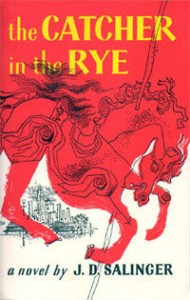 I turned thirty this September, and I’d never readÂ The Catcher in the Rye. Even though it’s my friend Sasha’s favorite book. Even though it’s one of the most famous novels of the twentieth century. Even though it’s short and I love short novels a lot better than long ones that are padded out with bullshit for forty thousand pages.

What drove me over the line was that recently my friendÂ Madaline Rielly, who’s a keen writer and a fine and curious human being herself, had the gorgeous idea that she’d read my novelÂ Kiss Me, Genius Boy, which I’ll call KMGB from now on, and then write me a letter about it. Among other things she said that the main character, Joshua Rivers, reminded her of old Holden Caulfield. So I thought I’d better get my ass in gear and read Salinger’s one famous book at last.

I find I don’t have any reason to object when she says Josh and Holden are alike. Some of the parallels are truly uncanny. For instance there’s a scene in KMGB where Josh is standing outside a bus stop and feeling depressed about girls and it starts raining and he just stands there and lets himself get drenched. Actually, I once stood in the rain at a bus stop like that myself, which is how I got the idea. And there at the end ofÂ The Catcher in the RyeÂ I see Holden let himself get soaked sitting in the rain watching his sister Phoebe on a carousel.And right after that it looks like he gets shipped off to a mental asylum, so I guess that was the point where people thought he’d finally lost it.

Josh doesn’t lose it, and neither did I. I don’t think it gives anything away to say that.

Like Holden, there’s a pretty strong voice that Josh has, too, and I can tell you, when you read Holden Caulfield practically talking to himself all the way throughÂ The Catcher in the Rye, it sort of gets inside of you. Like, today I had an argument with someone in my office about cleaning out the fridge, and I said “I’ve never opened that goddamn fridge,” and went right on about it. That’s how it works.

I guess some of you might say it doesn’t help to talk about characters in books like they’re real people. But the thing is, Holden CaulfieldÂ isÂ a real person. He’s exactly the kind of person that hangs around this world and gets misunderstood and pissed off and nobody realizes that there’s actually a really sensitive person in there who in a bunch of ways is really better than the petty bastards around him.

Thing is, Holden’s got a sharp mind, even though he doesn’t care much about school. What he sees around him is a bunch of people act phony or miss the point. And the point is the whole thing of that kid who jumped out of a window at that school he went to, and that flitty Mr. A’s picking him up when no-one else would go near him. Joshua Rivers in KMGB’s not nearly so much of a humanitarian, but still there’s this feeling of being someone who’s actually more sensitive than other people, and gets to being a bit of an asshole just because he’s so damn disappointed in how crumby everyone else can be all the time.

The Catcher in the RyeÂ is that immortal story of the young man who thinks himself superior and gets so pissed off with the phony, petty bastards who want him to play by their rules that he gets the idea he should just give up and drop out. Holden has his dream of a cabin, or going out west, or going out West to a cabin, and taking some girl with him and just letting the world go by. And maybe I’m like that and not everyone else is like that, but this seems to be like, the final human dream, the final utopia for the guy whose just been trying to do his own thing and while he was doing it some petty bastard came up and wrote “Fuck you” right on his forehead.

I fucking love that dream. I get a huge bang out of it.

That’s why I give this goddamn book five stars.