I’ve had the chance to try the Mac app already, and looks like it’s a decent interface for interacting with your library and your books on the desktop–an area where Amazon’s Kindle app is somewhat lacking. I have an old Kindle 2 that I bought before the international wireless models were available, and the current desktop app doesn’t do anything to help you sync files from your PC/Mac to the device. Nor does it offer an interface to help you buy things. This is certainly good news for those of us who have become accustomed to the advantages of buying and reading e-books. Of course, there are also great app options for those who prefer to buy O2 Mobile Phones for use as an e-reader, and especially for anyone who has recently purchased the Apple iPad. The latter, in particular, is certainly considered a rival to the Kindle, and so could provide competition for the Kobo eReader too. Most of these apps and devices, however, are constantly in the process of updating and improving their software.

The Borders app offers you easy access to a range of free books, which is a good starting point for new users. Although some paid books are on offer as low as AUD 7.95 for Pride and Prejudice and Zombies, others are over $20. Dragon Haven by Robin Hobb is $24.95. This compares poorly with Amazon, which is offering the same book for Kindle for USD 14.99. Well, it compares poorly while the exchange rate is still good.

The store also helps users out with some recommendations, including one for “Books with Bite”–an oddly specific catering forTwilight fangirls and anyone else with a vampire fetish. The current top 50 is heavily skewed towards romance.ï»¿

At AUD 199, Kobo as offered by Borders isn’t much cheaper than Kindle, and it’s lacking some of that device’s appealing features–notably the wireless. There isn’t a lot here for readers already locked into Amazon’s platform by its non-standard AZW and TPZ formats, and by the horror of DRM, still an omnipresent feature of the market for non-free ebooks at present.

Nevertheless, having this available in Borders stores, linked in with a good, reasonably-priced device and a robust store and multiplatform apps is, I think, going to finally take ebooks mainstream in Australia. That’s going to be a good thing for readers, since in time we should have access to a full range of internationally available books at reasonable prices (not $25 for a paperback), instead of having to order them from Amazon with exorbitant shipping costs when we can’t find what we want in a store.

I won’t be switching from Kindle myself, but Borders’ offering is something I could consider recommending to friends or relatives. I’ll save the final verdict for once I’ve had a chance to play with one in-store. 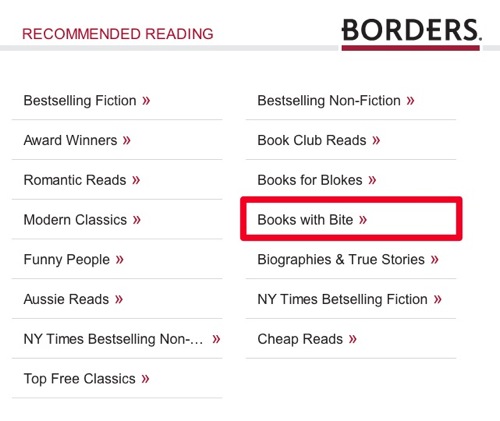