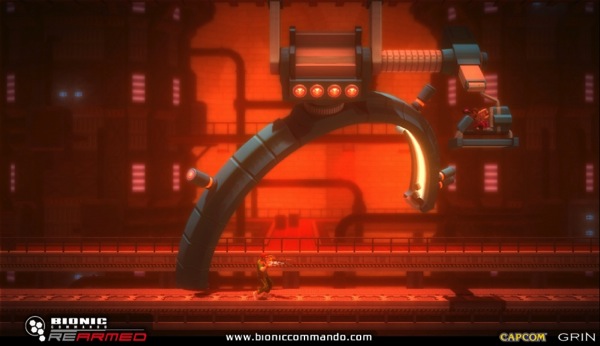 What’s the best way to remake a classic 1980s NES game? Do you update it with a cartoon aesthetic that would suit a Flash game on the web, or do you shoehorn eight-bit graphics and gameplay onto a next-gen console without revision? Capcom has tried both approaches with its downloadable resurrections of the Commando, 1942, and Megaman franchises, but with Bionic Commando: Rearmed, it’s taken a far more appealing middle path.

Where 8-bit aesthetics on high-def platforms are concerned, it hits the sweet spot. For instance, there is a suite of graphical touches that reference eight-bit pixelation, including the extra life icon, the world map, and a cute Megaman reference on a poster that reads “wear a helmet.” The remixed retro soundtrack evokes its heritage without subjecting players to constant NES-era bleeps and blorps à la Dragon Quest, and it even includes the theme from Commando that was so disappointingly missing from Wolf of the Battlefield. But at the same time, it’s all refreshingly new—the HD graphics have the clean-cut look of pre-rendered 3d animation, and some levels feature atmospheric weather effects that clearly show how far videogame graphics have come in the past twenty years.Gameplay remains the same as the 1988 NES version. Here, too, there’s a feeling that mingles freshness with nostalgia. It’s simple shooting and platforming, but with a unique mechanic: the hero cannot jump. Instead, he can swing on and up to platforms with his extendable bionic arm. Beating the satisfyingly large bosses at the end of each level delivers a new weapon or upgrade that will be useful or even essential in the areas that follow, but there’s little backtracking to explore areas unlocked by these new abilities, as there is in the Metroid and Castlevania series.

There are six to ten hours of gameplay here for most, bulked out by a large number of “challenge rooms”: time-trials through a succession of increasingly difficult tests of the player’s use of the hero’s swinging abilities. These reveal the depth of possibilities created by Bionic Commando‘s simple mechanic. Ultimately, it’s the extreme satisfaction to be had from mastering use of the arm (with the caveat that the PS3 controller makes it relatively difficult to execute essential diagonal-up motions) that has kept this game as enjoyable now—far more so than many contemporary games—as it was when first released.

This review was originally posted on the now-retired doloco.com.